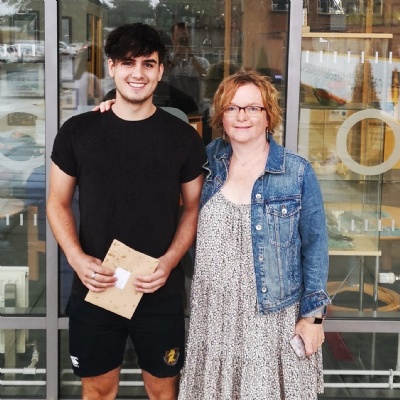 Sixth Formers from Samuel Whitbread Academy are today celebrating their Key Stage 5 results, having faced months of being away from school and their friends during a period that they never could have imagined.

Students’ results this year are based on a combination of teachers’ assessment of what grade a student would have got had they sat the exams, and the rank order of students within each grade at the school, together with a national standardisation process which takes account of the school and national performance over the last three years. This week we also heard that in some cases students will have the option to appeal their grade in favour of their mock exam grade if they wish.

Part of Bedfordshire Schools Trust (BEST), Samuel Whitbread Academy saw 68% of students securing A*-C in an A Level qualification and 41% of grades were A* - B with an Average Point Score of 31.6. These grades may well go up in the following weeks, after appeals by students.

A number of students did remarkably well, with 68 students securing one or more A*s and A grades in a range of subjects. There were also some superb results amongst the vocational courses, with 28 of the highest distinction-star (D*) grades in total and many more distinction awards.

In addition to these grades, there have been successes arising from Samuel Whitbread Academy’s Northampton Saints Rugby Course graduates in recent weeks, with Tom Litchfield earning a professional contract with Saints, Reon Lewis receiving a scholarship to study at Brunel University and sign with Ealing Trailfinders, and Jake Bridges securing a contract at Coventry.

Nick Martin, Headteacher of Samuel Whitbread Academy, said:
“I am incredibly proud of how hard all of our students have worked throughout their time in the Sixth Form. They have been fantastic role models for the younger students and thrown themselves into every aspect of school life at Samuel Whitbread Academy, including: mentoring, team teaching, sports coaching and running assemblies. As well as having to cope with lockdown, they also received the news that all of their exams were cancelled, which they had spent two years preparing for. They are still having to cope with uncertainty, with announcements about the new appeals process being released this week, which will potentially affect up to half of our students. Over the coming weeks we will be doing everything we can to ensure our students can access the course or apprenticeship that they have dreamed of doing.”

Alan Lee, CEO at BEST, said:
“We are pleased with the results seen at Samuel Whitbread and I am delighted that so many of our students are able to take up places at university, college or an apprenticeship. While we are still seeing an emerging picture across the country, given the unique situation this year, it is clear that these students have every right to feel very proud of themselves. I wish them all the best for the future.”