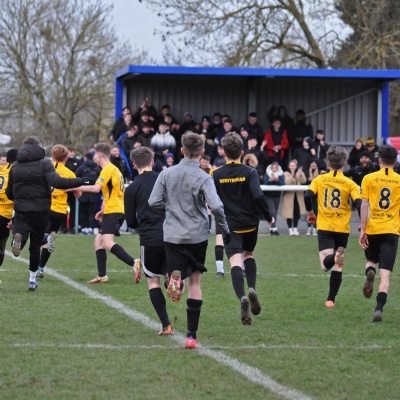 Aspiring journalist, Year 13 John Bragg has written and edited a brilliant match report on the U18 football quarter-final match against Beechen Cliff. To read please see below.

Whitbread victorious in National Cup, through to semi-final.

Samuel Whitbread’s biggest football match since 2016 saw the U18s pitted against a good side in Beechen Cliff from Bath, on a chilly Thursday afternoon at the familiar Shefford Sports Club ground. Around 200 Whitbread supporters filled the stands, generating an electric atmosphere to spur on the team.

An end to end first 15 minutes saw Whitbread slightly on top, producing a number of chances, whereas the visitors were relying on set pieces for a sniff of goal. A great chance for Whitbread came in the 20th minute, in the form of a free kick on the edge of the box. Oliver Brennan, who would go on to have a great game, stepped up to take it. He got his effort over the wall, but into the arms of the Beechen Cliff keeper.

Not 3 minutes later, Whitbread’s best chance of the game so far was engineered by Brennan as he tussled with the Beechen Cliff midfield, eventually managing to play a sumptuous through ball to left-back Finlay Skilling. Unfortunately, the chance went begging, and it remained level. Minimal pressure from the visitors led to the final moment of the half being another opportunity for Whitbread, with marvellous Scott Metcalfe turning and burning his man before lifting an inviting ball towards the back post. Temi Akinbusoye got up and got close - alas, there was no breakthrough for the hosts before halftime.

A tactical switch from the gaffer at the break certainly appeared to inject some adrenaline into Whitbread, as a penetrating run from Akinbusoye in the 50th minute led to a penalty for the hosts. Akinbusoye stepped up, placing his spot kick to the left, but the Beechen Cliff keeper made himself equal to it at full extension, palming it onto the post and keeping the game goalless - for the moment.

The Whitbread marksman did not let his miss subdue his performance, and went on to fire the hosts ahead in the 60th minute. A probing long ball from defender Vinnie Baker was dangerously flicked on by half-time reinforcement James Tubridy, into the path of Akinbusoye. The lethal striker breezed past the player trying to defend him, and smashed a great finish into the side netting from a tight angle, finally breaking the deadlock.

Unfortunately, the celebrations could not last long, as Beechen Cliff went on to level the game two minutes later. A dead ball situation in the Whitbread half led to a menacing delivery from an opposition winger, which was neatly headed home by a Beechen Cliff player. This was first met by a deafening silence from the Whitbread fans, followed by a wave of encouragement, relighting the fire in the players. A scare for the hosts came at the 65 minute mark, when the Beechen Cliff players insisted that they had the ball over the Sam Whit goal line. However, a fantastic piece of officiating from the linesman ensured that the score, correctly, remained level.

After 15 minutes of constant pressure from the Whitbread players, including a narrow miss from James Tubridy, an opportunity finally appeared. The hosts won a freekick on the left side of the opposition penalty area, Brennan stepped up to deliver the ball into the box. He did so, it was headed goalwards by centre-back Alfie Gardiner and prevented from going in by the arm of a Beechen Cliff player. A stonewall penalty. The Beechen Cliff player in question was shown a red card for denial of a goal scoring opportunity, and Brennan stepped up to take the kick. He absolutely walloped it into the top left corner, the keeper did not stand a chance against a strike of that quality. The converted spot kick made it 2-1 to Whitbread with less than 10 minutes to play.

Chants rang out around the ground, as Whitbread stifled any attempt at attacking from the visitors. As Beechen Cliff clutched at straws trying to find an equaliser, the time on the referee’s watch ticked on, and eventually he blew his whistle, sending Samuel Whitbread to the National Cup semi-final for the first time since 2016 - no less than they deserve after such a lionhearted performance.